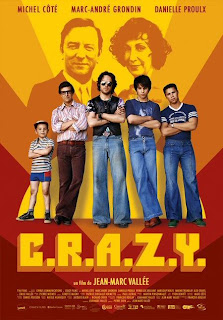 
It is a story of how the mix of love and expectations in a family can compel people to refuse to acknowledge truths about their emotions and identities.


Zach is the fourth of five male children of Gervais and Laurianne. Growing up, he knew that his father's sole desire is to make all his children a man's man. This desire has made the dynamic of their family a odd. Sibling weren't particularly close to each other despite the obvious small moments that shows they actually love each other.

As Zach hits maturity, he starts doubting whether he can live up to the expectations of his father and starts detesting the image his mother built around him. Yet, his love for his parents is too strong that it is blinding him from the truth about his emotions and his identity. Take note that he is not lying because he can't even seem to see the truth.


It is this kind of character build up that makes the movie unique for me. It does not push the character to make stupid mistakes in order to complicate the story. Zach, for example, didn't live a life of lie. He didn't choose to lie. It was his love for his parents that made unable to see the truth. It saved from being a coward and selfish character who could have saved everyone the trouble had he chosen to fight for the truth.

It also didn't become melodramatic or soap operatic. The complicated dynamics of the brothers didn't happen out of nothing. Events, both unpleasant and humiliating, pushed their relationships to become what it was. However, the movie didn't dwell on the drama of root of the problems. Instead, it progressed the story in a way that would allow the audience to read between the lines. In this case, see between the scenes.


There is a lot of subtleties in the film. It is not one of those movies that will give you the explosion that you would expect from a film that spent 90 percent of its time building up to a climax.

The climax will actually happen in your mind. It is your understanding that will reach a peak and your emotions that will experience an explosion.