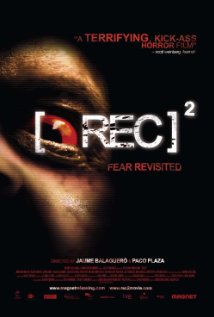 This week's Must See Foreign Films Recommendation is REC 2.


REC 2 opens with Ángela Vidal (Manuela Velasco) being pulled towards darkness. The whole of Barcelona is almost wiped clean by some human monster. Each medical unit sent has never returned so a SWAT team is sent to accompany the government Health officials. The group makes it to their destination only to find out that the health official they accompanied is actually a priest and is there to investigate demonic possessions.

Don't forget to visit Amazon for Must See Foreign Films for as low as $2.

The priest wants to get blood samples from the Medeiros girl who he believes to be the sources of the devil spirit. Before they could do anything though, they realize it’s not demons but some kind of a virus that turns everyone into zombies who attach uninfected humans. The team struggles to stay alive but situation is made worse when a group of thrill seekers arrive only to realize no one might leave the building alive.

Rec 2 is one of the must see foreign films for horror lovers. It is like turning the Exorcist to a youth action and modern movie. It’s a bunch of people running from and fighting demons using modern weapons.

Directors Jaume Balagueró and Paco Plaza wisely kept thing fast and moving. It forces the audience to be alert rather than pensive. It doesn’t give the audience the chance to pause and think about the motivations and objectives of characters or how it is consistent with their actions. It’s a trick but it worked well to a certain extent. It made the movie an action-pact thriller rather than a chilling horror flick.

Then he immersed the entire movie in darkness which gave the Directors a nice excuse to use modern elements like night vision goggles. It makes the scenes more edgy and more intriguing as the eyes struggle to focus and understand clearly what is going on.

It is consistent with the original and maybe too consistent for some people. The first one was pretty good that it begs the question of what else can be done to warrant a part 2. It didn’t really progress in terms of character development or plot movement but REC was never much into the story in the first place.

Come back for more Must See Foreign Films and Asian Music Blog Recommendations.
Posted by Xath Cruz at 12:30 AM