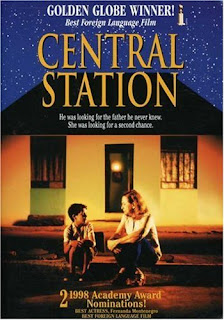 Central Station is a must see foreign film and it should have been an academy award winning foreign film. It was nominated in the 52nd Academy Awards.
It follows the story of a middle-aged woman who makes a living writing letters for people who can't read and write and the friendship she developed with a kid who became a customer when he asked her to write a letter to his father which she never mailed.


Amazon for DVDs of Foreign Film with as much as 70% discount.


Dora writes letters for people who can't read and write for pay. However, she sometimes doesn't mail the letters. One of the many letters she didn't mail is that of Josue who wants to see his father. When Josue's mother died, Dora was forced to take him in. She sold the boy but felt guilty afterwards and decides to steal back the kid.

As she tries to become a guardian of a little boy, she is forced to see the error of her ways as she starts seeing things from the point of view of the child.

The movie manages to establish the deep bond that Dora and Josue develops without having to go through the predictable melodrama that you would usually expect from a film that centers on odd friendships.

The movie managed to focus on the remarkable angles of ordinary events that regular people regularly experience in their everyday life. There are no big events in the movie, it's all about being able to focus on the small moments to make the small things the big things.

The movie looks dreary. There is an obvious dominance of what seems to be the perpetual sunset feel in the movie. Things look "orange" or light red which perks up the otherwise flat scenes. I think it is an attempt to balance the ordinariness of the whole narrative.

There is an obvious effort to avoid big and dramatic events and the director made up for it by setting up a really dramatic environment and bright cinematography.