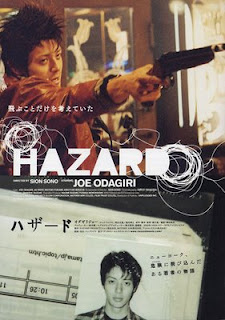 Our Must See Asian Films for this week is Hazard, another film startting Jo Odagiri.

I had no background about this movie before watching it except that it starred one of my favorite Japanese actors, Jo Odagiri. Much like some of his best movies, I expected something cerebral. I was ready to jump into a vortex of subtly implied story twists.

Oh, I jumped into a vortex alright... but it was one that twisted me around a tornado of unfulfilled dreams and embarrassing failures I have been too ashamed to face.

Shin finds himself bored and unhappy in Tokyo. He has always wanted to go somewhere exciting. When he read about the hazards of New York, he left everything behind to begin his journey to experience New York.

Desire is as natural as breathing and as old as living.

That’s exactly what the movie is and that's why it's a must see Asian films. It’s a story about the most natural thing in the world, the desire for more.
It progresses into an exploration of the reality of what we desire. We often paint an image in our head, an ideal that we want to find ourselves in. More often, we do end up getting what we want but it doesn’t turn out to be what we imagined it would be and that’s what screw us the most.

That’s what this film is all about. It’s a reflection of how our eagerness to pursue our ideal blinds us from seeing that we have already been living our dream all along.

He will put you in awe New York’s grandness which will add to the depth of your disillusion as the film progresses.

Come back for more must see Asian films.
Posted by Xath Cruz at 12:30 AM