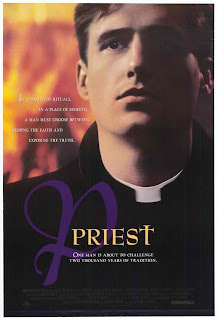 Father Greg Pilkington is assigned to St. Mary's parish in inner-city Liverpool. As he struggles to get into the ways of a peculiar parish, he discovers that Father Matthew Thomas is engaged in a sexual relationship with a woman. This leads him to question his faith and the institution he is serving.

Click here to check out "I Will", a movie about how two kids decided to stop hoping and wishing and start doing something to make the desire of their heart come true.

The movie is defined by questions. The movie was backwards in that it didn’t provide an answer to the questions being raised in the entire movie. Instead, it deconstructed situations, asked questions and left it unanswered.

It starts with a basic conflict.


When a girl confesses something to the Father Greg, Father Greg had no choice but to keep it a secret. However, he knew that keeping it a secret would damn the girl to life of hell. He know he can do something about it but that would go against his vow. If he does nothing about, he legally exonerated but morally f*cked up. When people learned later on that it could have been stopped had the priest done something about, he was asked a question that was too painful for him to hear, let alone answer.


“How can you preach about love?
How can you claim to be a servant of God?”

Greg is trapped between the two virtues he swore to uphold, the virtue of keeping everything he hears during confession a secret and the virtue of helping people who are in need.

He ran to his crucified God and asked the question that probably best describes the whole film:


“If only I have the certainty that there is God,
I can take on all the agonies of the world and
it will be alright but all I have is faith.”

The questions are not limited to legal and moral law. There is also the question of moral limitation.


Father Greg is gay and the Catholic institution apparently states that man to man sexual interaction is wrong. Moreover, a priest is prohibited from having sex in any shape or form. But that is not the only secret the parish harbors. There is also Father Matthew, who has a wife and a child.

When his one-time indiscretion blew over, the whole community turned against him. As he suffers the utmost humiliation that anyone could ever make a priest experience, there is Father Matthew beside who is committing a “sin” just as grave if not grave as he does. Yet, Father Matthew is saved from the hatred, all because no one knows of his secret.

Click here to check out Children of Heaven, the only movie I have seen with "sinless" characters that didn't irritate me.

What is worse, Father Matthew who extends his support to Father Greg preaches to him the faults of the church they both serve. Yet, shows no guts to stand up for what he believes is right.

Is Father Matthew doing it right? If you represent an ideal or an institution or something bigger that influence people in the deepest of their core and you are doing something that is declared wrong by the institution but is right according to your own disposition, is it better to live it in secrecy to protect the people that hang on the ideal? Or is it better to come out in the open and fight it? Is it better to shake the whole world because truth is more important than peace?

In Father Greg’s case, the decision to expose his homosexuality wasn’t his. As he was forced to deal with the consequences of his actions, he gets castigated to the depths of human hell by the same people who live by the value of love and forgiveness.


Father Matthew confronts him one night, after he refuses to give communion to someone, “They always have more right to receive it than we have to give it.”


Does that apply to him too? Does he also deserve forgiveness more than people think he does? Does he need to feel less guilty?


But perhaps the greatest question the movie posts is about how prayers are actually answered or how things happen according to the plan of God.


When he realizes that the danger of what he heard in the confession is ACTUALLY unfolding and he can’t do anything about it, it pushed him to the single greatest confrontation between a priest and his faith.
In front of the image of his crucified God he utters:


Do something. Don’t just hang there,
you smug idol bastard. Do something.
I’m gonna tell someone. That’s what you’ll do.
You wouldn’t see this person suffer.
You’d say this is all suffering humanity.
For this I came. You wouldn’t give a damn
about the church. The secrecy of confession,
how can that be good when it allows evil
to thrive? You could speak out.
I know you’d speak out.

You could speak out. You’re the son of God.
You could make the rules. You are the
Son of God. I’m not. I’m just a priest and
I can’t take on 2,000 years of history.
That would be arrogance. They’d crucify me.

I look for an example, I’m in the depths
of despair and all there is, is you but you
perform miracles. You turn water into wine.
You raise the dead. You cured the sick.
How could you feel possibly know despair?
Well, I’m feeling a little low today,
I’ll raise somebody from the dead.
How could you, with that kind of power,
know what I’m going through right now?

As he murmurs, faithfully and sincerely, what remains to be the most faithful prayer of all, The Lord’s Prayer, answers are given to him but it is not in the way that seems just, fair or even kind.

It brings up the question about whether things are supposed to make sense at all? Does everything really have a plan? Or is everything a tabularasa, free for all humanity to mess up and spite?

Don't forget to sign up to our newsletter. You will receive access to watch and/or download foreign movies every month. You can also request for movies!


Check out some of the best foreign films available now.

This film was said to have been about homosexuality. Although Father Greg is gay and his homosexual act is a pivotal point in the film, it is not a homosexual film by a long shot. It is a film that aims to challenge how people judge, how people live and how people forgive.It is surely one of the best foreign films I have seen.
Posted by Xath Cruz at 12:49 AM